I’ve been working slowly to install the south side of the garden fence. Chain link is no easy feat when doing it alone. Over the last several weeks I installed a fence post or two after work each night. I did not want to push myself too hard but now it was time to unroll the chain link and U nail it to the posts. This was a much-needed addition as Ares was constantly going into the garden and digging up plants including a small apple tree I had planted last fall. Hopefully, this will keep him and the chickens out of the garden. Though I do still have the west side of the fence to complete as well as two gates to install. 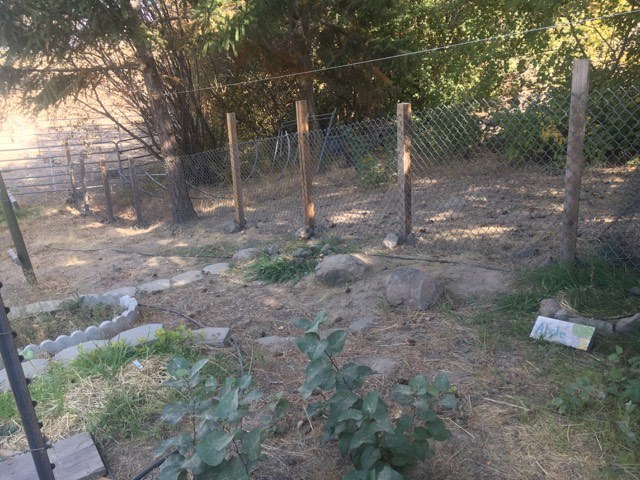 I decided today should be one of rest since I had busted my hide the last several weeks. So, I got my craft on and made a wreath for a local nonprofit who has a Holiday Raffle in December. Most of the items I had collected from the homestead like the metal star, miniature horseshoe, ribbon and barb wire. The ceramic cow skull and a bundle of wheat I picked up from a local craft store for next to nothing. I also made a similar wreath for the guest house but it didn’t seem as nice as the first one. I might add some deer horns and a bow looking at it now, it just feels so bare. It was fun doing something less strenuous.

After crafting most of the morning I  let the chickens out to run around in the yard. The rabbits got to join in the fun too! It was a beautiful day and I wanted everyone to enjoy it. The dogs were on their best behavior even with all the critters running around and playing.

After everyone had been outside I decided Johnny deserved to stretch his legs as well and I saddled up and went up the mountain. He seemed to enjoy himself just as much as I did and we took a gentle jog around the neighborhood. The fire damage is still very apparent but there is a sense of feeling on top of the world from this viewpoint. I love it out here, it is always breathtaking no matter what time of year.