Well, this years fire season came slightly later than normal but it hit close to home. Friday afternoon I received a message from a coworker with video footage that a fire had broken out in the area I live. It looks like the ignition was caused by either a back firing vehicle on the road or someone tossing out a cigarette butt. In north central Washington we have extreme conditions and this sort of thing has become a terrifying and regular occurrence.
Since I work roughly an hour away from my homestead I immediately called my neighbor for an update, he seemed to think things would be okay until I arrived home but he promised me if they were not okay he would go to my house and rescue my dogs.
The commute home was one of the most terrifying experiences as I watched from afar the huge plume of smoke rising up into the sky and witnessed white smoke turn black on several occasions as the fire consumed structures. I cried out to God asking that he protect my home, I sang songs for rain and pleaded with my Heavenly Father not to take everything I had. Then I prayed for the fear to go away. I needed to stay calm and drive safely. Once I felt some of the fear subside I gave my little homestead to God and said what you give you can also take away, so if it be your will then so be it. I know my heavily father will always provide and I allowed myself to be swallowed by faith.
As I approached the back way into the homestead I realized I would not be allowed in as the roads were engulfed in flames. Even if I was able o pass the sheriff road blocks I am not sure I would have been able to see the road to make it back to my house at the end of a dead end road, as the realization occurred that I would not be able to return home my neighbor called and informed me he had collected my dogs and was barely able to drive out of the neighborhood. Phew! He was safe and so were my pups. Now to wait. What would happen? Would I need to rebuild? Would that even be possible for me?
I met my dad further down the road and we sat watching from a safe distance as flames continued to swallow up trees and hillside. Smoke was over taking the views and we tried our best to see what all was happening. Air support began to slow as darkness fell. But as it grew darker things seemed to be getting under control.
The road blocks were no longer a firm road block but now residence were able to regain access to their homes. This is when my dad and I drove back up to the house to unveil the damage that had occurred.
Fire fighters were able slow the effect of the fires. Many of my neighbors however where not so lucky, some lost everything, others only received moderate damage to their out buildings, my closer neighbor received a loss to his entire power system and moderate damage to the south side of his main home. 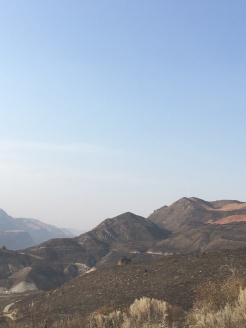 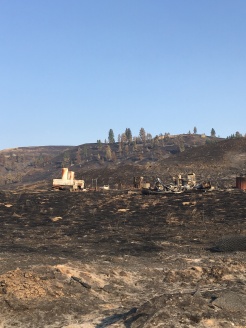 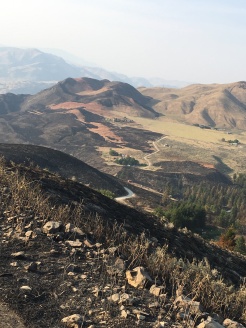 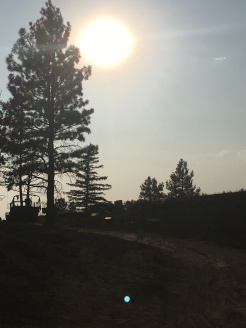 That first night my boyfriend and I stayed at my parents house with the dogs as the fire in the area was still very active and the homestead remained on a level two evacuation notice. That was a night I hardly slept. When I did finally fall asleep, I was awoken by the most amazing sound; rain! God truly does answer prayers. In his own timing but Gods timing is perfect timing.
The next morning I awoke bright and early ready to return to my home and see what would need to be done to recover from this horrific event. I was astounded that the rain over night had almost completely drowned out the remaining fires and the fire crews were able to stop the fire just a few hundred yards from my property line! What a relief!
The fire crews have remained in the area to ensure no reoccurances happen from windy conditions, dry land and remaining hot spots. It is a relief to have them on duty and so near by. several of them have stopped in to check on me and the critters and I greatly appreciate it. All in all I’m blessed to have suffered no losses and to have had such a strong prayer team backing me and lifting my homestead up to God. He has great plans for me and this little homestead with a view and I can not wait to watch them unfold!