Luke and I enjoyed a long Saint Patrick’s day weekend by taking the Friday before off. We had a long “honey do list” which took us most of the weekend to complete. The plan was to get the horses out for a trail ride or two, clear up some of Luke’s property, transplant some honey suckle onto Luke’s cleared property, pick up and paint some new bee boxes, clean 100 plus bee frames and render down the wax from the old comb and sneak in a trip to the lake to go fishing. Phew, that is a lot to get done in just three short days!

Friday we tacked up and road out onto the power line roads. There are several great dirt biking trails and since a majority of people were at work on Friday it was a quiet day to take the horses out. The horses of course were feeling their Spring oats and acted very full of themselves.  Over all it was a nice day and great ride! Once we got back we washed our horses and set them back out into their paddocks. They both immediately rolled in the dirt of course but at least the long winter coats and most of the winter mud was washed free prior. 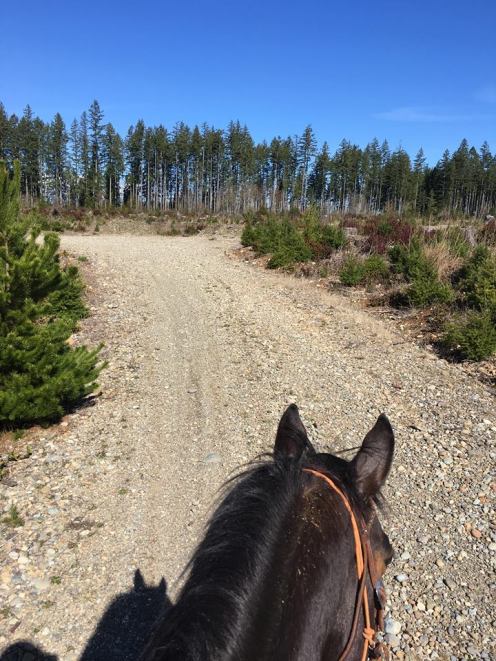 We then jumped into the truck and went on a small road trip to purchase some more bee equipment. We picked up six more boxes with frames and two additional lids already primed and ready for paint. Once we got them home we went ahead and painted my boxes lavender to match my current ones and Luke’s the electric blue to match his set. One more coat and they should be good to go! 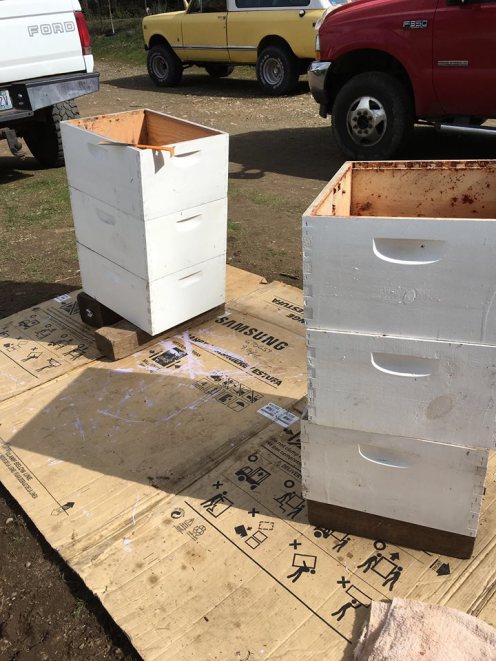 Once all the boxes were painted we set to the task of cleaning the frames of old brood comb. This was a tedious task but we wanted to make sure that our new nucs do not have to contend with wax moths, mold or anything else that could be residing in the old comb. The smell when we broke through cells filled with pollen was intense and our stomachs turned a few times as we got close to finished the 100+ frames. We were making quite a mess with piles of old comb here and there and everywhere! We saved all of the scrapings to render down the wax. Lucky for us I had put Corned beef and cabbage in the crock pot so after our hard work, dinner was all ready for us and greatly helped replenish our energy for the unfinished rendering ahead. I have this thought in my head I will have pounds and pounds of wax to make candles or new frame foundation with but in reality it was a lot of work for about half as much wax as I expected. I watched several bee keepers on Youtube use different methods to render the wax and decided to try the crock pot method first as it sounded easy enough. The crock pot method is much to slow for how much comb we had to process (two large trash bags full!) So we tried another method of boiling water in a large pot and dumping the nasty brood comb inside until it became a black sludge. Once the cells broke down that meant the wax was melted and it was time to strain the cells from the melted wax and hot water. This was a process let me tell you. Luke and I took turns straining because your wrists will get really sore after just a few moments of this task. 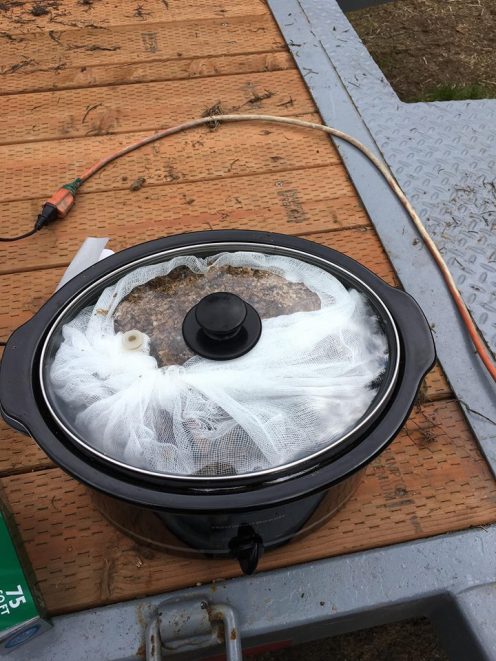 Once all of the wax was melted off of the cells and strained, we allowed it to cool over night so that the wax would rise to the top of the water and form a solid round brick. We will need to refine the wax two or three more times as there is still some gross bits residing inside that we did not catch prior. I would say by the end of it we got about three pounds of golden wax. Was it worth all the effort? I am not yet sure yet. Maybe once I start making some candles I might feel like it was worth it but for now Luke says it is probably a task he would not do again. I think we got a little impatient and lost quite a bit of wax in the straining process. I would say in the future we should do smaller batches in the crock pot over longer periods of time to cut down on the waste (though not alot of wax was produced with the crock pot method it did come out much cleaner than the other process). Below is the image of wax in our cooled down bucket (still to be filtered another two times). 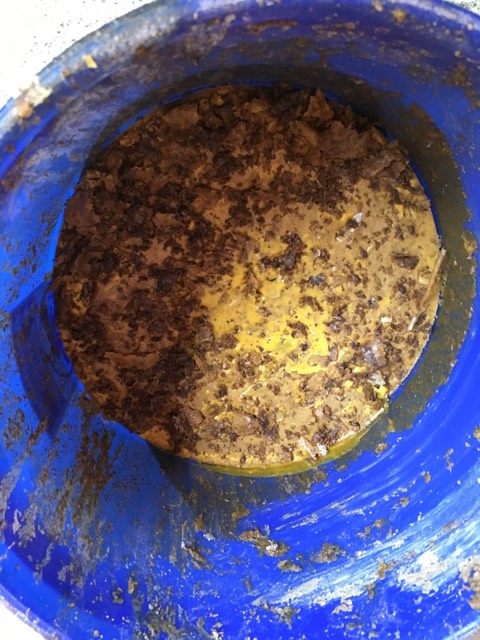 Another task we took on for the weekend was cleaning up a portion of Luke’s property to prepare for a small orchard. His father helped out with this chore, maneuvering the excavator and taking out several alder trees. Luke did not want them around his property as Alders have a tendency to fall down during wind storms. Then we set to cutting up the fallen trees and burning them in a brush pile. As the day progressed the pile became larger and the property was taking shape. Even Zeus and Ares helped out by finding me sticks to toss on the fire (once they were done playing with them of course!). Then we planted two honey suckle plants, one on each side of the entrance of the property. I am rather excited for Luke as he begins to work on his land. I know how rewarding it has been for me working on my homestead and I look forward to seeing his take shape as well.

We completed the majority of our weekend “honey do list” except we only go out on the horses once when we hoped to go out at least twice and we did not get a chance to get out on the lake and catch some fish. That is okay though as it was a very rewarding weekend! Happy Saint Patrick’s day everyone! =]